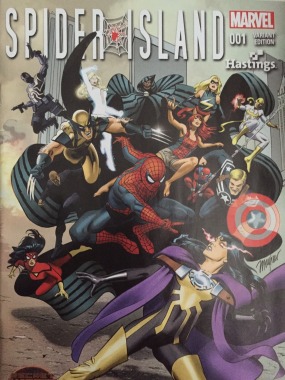 Spider Island is the third Secret Wars title that I’ve picked up to read.  I’ve also followed A-Force and Captain Marvel and the Carol Corps and I’m enjoying all of them.  Spider-Man is one of the titles that initially got me into reading comics, so it is  interesting to see Marvel’s main universes collide and to see what has happened in Spidey’s corner of the universe.

Spider Island is written by Christos Gage, drawn by Paco Diaz, and colored by Frank D’Armata.  I got the Hastings Variant (pictured to the left), since that is the closest thing I have to a LCS.

Agent Venom is the narrator for the comic and a good portion of the story is set up through his monologue.  I’ll be honest, this isn’t my favorite way of establishing setting and backstory, but I think that Gage really nails Flash Thompson’s character and his voice, so I was a bit forgiving.  I still wonder if there could have been more showing and a bit less telling in this comic.  Diaz is a strong artist and I think his art could have been relied on to “show” us a little bit more.

That being said, Gage absolutely nails Flash Thompson as a character.  Flash is a personal favorite of mine and I’ve read a lot of his recent story lines.  Flash always has an underlying lack of confidence that I think makes him very human and very relatable.  Gage also mentions Flash’s past with Peter Parker/Spider-Man and how Flash looks up to Peter.  I liked seeing this, since really, Spider-Man is a big part of why Flash has become a hero and now he is a big part of why Flash continues to be a hero.  If you’re a fan of Agent Venom, I think this is a comic you will really enjoy.

Diaz does a great job with shots with a lot of characters in them.  Each character still looks distinct even if they are in the background of the panel, there is an attention to detail in each panel and each character, which I really liked.  He also has a good talent for showing motion in this comic, and there is a lot of action, so that is important.

I plan to pick up the next few issues that come out and I’m excited to see where this story goes.  Also they turned another one of my favorite characters into a vampire, so I’m straight up tickled to see where that ends up.  If you’re thinking about picking up some of the Secret Wars titles, I’d say A-Force, Captain Marvel and the Carol Corps and Spider Island are all good stories to add to your list.

Aubrey Lyn Jeppson is a Freelance Writer. Who really wants to live in reality all the time? Writing affords her a much needed escape from the mundane into the fantastical. She's always looking for other writers and artists to collaborate with. Email her at aubrey.l.jeppson@gmail.com. View all posts by AubreyL

This site uses Akismet to reduce spam. Learn how your comment data is processed.