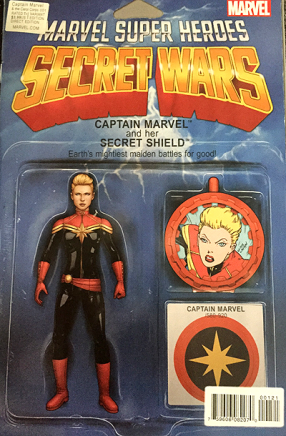 Normally I’d like to do this review on Thursdays, so it gives readers a chance to pick up the comic, but it’s been a bit of a crazy week for me, so here it is a day late.

This week the spotlight is on: Captain Marvel and the Carol Corps issue 1 by Kelly Sue DeConnick and Kelly Thompson, with David Lopez on art.

Be ye aware, SPOILERS AHOY!  If you haven’t read the comic yet, wait until after you have to read this review.

Captain Marvel and the Carol Corps is part of the Secret Wars event that Marvel is currently doing, so it’s a departure from the storylines we’ve previously been following with Carol Danvers/Captain Marvel.  That’s not to say there aren’t a few familiar faces.  Helen Cobb is a member of the Banshee Squadron and we also see Carol’s tenacious and adorable side-kick Kit, all grown up as the Thor of Hala Field.

With the multiverse destroyed, all that was left was Battleworld, which is ruled by Victor Von Doom.  Doom is more or less seen as the god of their world and in typical Doom fashion, he’s taking credit for everything.  The sky, the sun, the moon, even Captain Marvel herself is a “Gift from Doom.” From what we see in this issue, both the Thor Corps and the Carol Corps are directed by Doom and his minions.  They are expected to carry out his will unquestioningly.

Which I kind of loved, since we even have people in the real world that believe that sort of thing.

But of course, one of Carol’s companions, Bee, gets her research on anyway.  She questions Doom’s teachings and though all her other squadron mates know about it, Carol only discovers it in this issue.  Carol sees the logic in Bee’s argument that something is amiss, and when they are sent out on their next mission by Baroness Cochran, she decides to investigate further.

Investigating further happens to mean that she ends up diving for a ship as it’s blowing up, as we may have come to expect from Captain Marvel.  That is something I really liked about this issue, that even in this world, it’s very clear that Carol is still Carol.  She’s still going to follow her moral compass, even if it puts her at great risk. She’s always been the self sacrificing sort and that’s no different in this new series.

For a moment, we’re left to question whether or not Carol made it out, but of course she did.  She’s also saved the life of one of the men on the ship her squadron blew up, and based on his look, I’m sort of hoping it’s James “Rhodey” Rhodes.

There were a lot of military tones to this, which is something we know Carol has a background in because of her Air Force days and have seen hints at it before, but here, we see Carol totally in that element.  I thought that was very cool, and you can tell that the authors have a familiarity with the subject matter and how things run for a group like Banshee Squadron aka “The Carol Corps”. DeConnick has done something similar in past issues of Captain Marvel, when Carol time traveled and met the original Banshee Squadron in World War II.  It was awesome to see the past team, but it’s even more awesome to see Carol leading her own team.  I also liked that each Carol Corps member is distinct and has her own sense of style.

I love the art style that Lopez has for this band of ladies.  Sometimes in comics women can look a lot alike, and therefore can be hard to distinguish.  In this comic, each of the characters has a very different look to them, so it’s easy to tell which character is which.

The panels with targeting systems were also very cool, since it gives us a really good indication where Carol as she is flying with her Squadron.  Something I haven’t really seen elsewhere in a comic, recently.  It was a very nice touch.

I also like this because there’s diversity on Carol’s team, just like there are in the real world Carol Corps (Meaning the fans).  My personal favorite from the Corps was “Maggie ‘Mackie’ McMorrow, Call Sign: Big Mack” because I see a bit of myself in her, at least in appearance.  But the fact of the matter is, having several ladies, all who look different and possess different personalities, leaves a lot of room for representation and characters for female readers to identify with.  Not saying dudes can’t identify with ladies, they totally can, but it tends to be lady representation that lacks when it comes to gender.

This site uses Akismet to reduce spam. Learn how your comment data is processed.

Aubrey Lyn Jeppson is a Freelance Fiction and Comics Writer and Editor. Writing affords her a much-needed escape from the mundane into the fantastical. She’s always looking for other writers and artists to collaborate with.