I recently discovered a great new tool for productivity tracking called Trello that has helped me a ton! I still use my bullet journal as well, but I keep my monthly goals and planned projects on my Trello board as well so that way they’re just a click away when I’m working on various projects. I wanted to give a brief overview here on my blog so you can see if it’s a tool that might help you as well.

Whether you are working by yourself or with a team, you can use Trello to track your tasks visually on a board. Overall, I found the user interface to be really fluid and easy to use, so there’s not much of a learning curve to figuring out how to use the boards.

How to Step Up Your Board

You can really set up your board in whatever way works best for you. You can make lists and then fill them with cards that represent different tasks.

I’ve set up some of mine by laying out goals for each of the coming months and each month was its own list, but I’ve also found I like the “To Do, Doing, Done” list layout as well, because it helps me focus on what my current projects are. Here’s an example of what your board could look like:

You can also easily drag and drop cards between lists, so it’s simple to move things around your board as you need to.

Features I Love About Trello 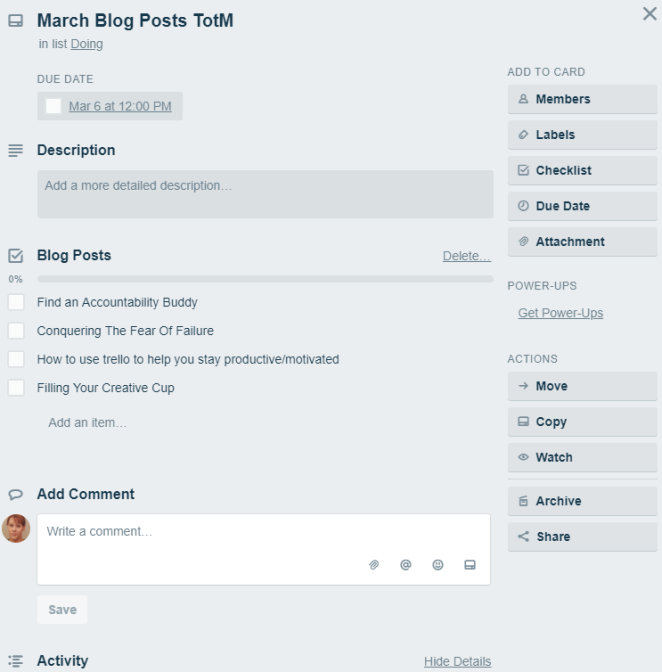 Checklists are nice if you are like me and love the feeling of marking something off the to-do list.  You can also see how many of the checklist tasks have been done by just looking at the board itself, so you have an easy idea of how much more you need to do. Deadlines are something I like to have, even if I miss them, so I have something to work towards.

If you haven’t tried Trello out, I would definitely give it a whirl! A basic account is free to use and it has all the features I mentioned here. If you’re looking for more advanced features, you can get a Business Class account for you and your team, which is super affordable at $10 a month.

Creative work can be isolating and it is easy to lose your motivation when you feel like you spend day in and day out working on your projects alone. Finding a friend or creative partner to help you stay on task is a great way to keep yourself motivated. I have had a few different accountability partners over the years and it has made all the difference.

A few years ago a dear friend and I decided we would work together through “accountability sprints” where we would check in via email every hour or so to see what the other had worked on. More recently, I’ve done weekly or bi-weekly check-ins with my accountability partner because that’s what our schedules allow for. If you need motivation and you want to start looking for someone to help hold you accountable, here are some tips and tricks I have learned over the years.

Make Checking in a Habit

I’ve done this a few different ways.  As I mentioned above, I have had partners I checked in with pretty frequently and some that I only checked in with every week or so. When we check in we always go over what we accomplished, what we did not quite finish, and what we want to do in the future.  You can use tools like a shared google doc to keep track of what you are currently working on, so your partner can visually see what your goals are and what you are working towards.

Build Trust and Be Comfortable

You need to be able to give and take constructive criticism from your accountability buddy.  If you can’t be honest about your productivity with your partner, then it may be difficult for the partnership to really push you to do more.

The two best accountability partners I’ve had were people I was good friends with first.  We both knew when to say “Hey, dude, you are slacking” and when to say “Hey, I know you did not hit all your goals this week, but you worked really hard and that matters.” Finding someone that you share enough trust with that they can give you honest feedback and helpful praise is really important.

A couple years ago I met a friend who I thought would make a good accountability buddy.  They were just starting to build a writing career, so they needed a lot of feedback, but they seemed rather eager and willing to do start the work so I dove in.  As time went on, I realized that I was giving them a lot of constructive comments on their work and trying to motivate them past the planning/plotting stage of their work.  As the months wore on, they stayed stuck in that stage and I realized it was not working out for either of us.

It’s best to find someone who is on a similar level to you creatively.  If you work with someone who has some finished work and has shown they can start and finish their projects it is more likely you’ll both be able to move forward creatively together.

Be A Good Buddy

The first post I wrote about this subject was mostly about what writers hear as they journey through their path to becoming published.  This post will be about how you can actually fail upward.  I’m not sure we can actually call it a failure, as long as you learn something.

Over the past two years I’ve sent out short stories, worked on novels, sent out comic scripts, all in hopes of getting my work published.  A few times those things have worked out beautifully, but more often than not I’ve either gotten “This wasn’t quite what we were looking for.” or no response at all.  But most of the time?  I learned something about submitting, something about writing, or just something about myself in the process.

Don’t get me wrong.  I did not receive those rejects with a spring in my step and a smile on my face.  Rejection always hurts, but if I don’t keep trying and working at it, I’ll never reach my goals.

Speaking of goals, my dear friend Yen wrote an really great post about goals and resolutions over on Virtuosity11.11.  She specifically talks about how to break goals down so that they are easier to accomplish and she’s actually the person who helped me figure out how to make some of my resolutions measurable.

Once you have a goal in mind, failure doesn’t quite sting as strongly, because you can remind yourself that everything you do is in service of that goal.  Goals help you plan for the future and figure out steps toward what you want.

For example, one of my goals this year is to submit at least two short stories for publication each month.  I’ve had this goal in the past, but now, I approach goals on a yearly, monthly, weekly basis.  I look at my month, at my deadlines and figure out when I need the first drafts, second drafts and final versions done of my stories.

Now, even after all this work and all the revisions, there’s still a rather good chance I won’t get every story published.  The only way to get better at writing, is to continue to do it.  So even if each story does not work out, I’m still practicing my craft, studying more about the art I love so dearly.  There’s something to be said for sticking with it, even when it seems like nothing is going right.

None of the authors, screen writers or comic writers got where they are today because they took rejection to heart and never wrote again.

So fail.  Fail a lot.  But always try again.